Recruiting from the Other Side

Last year at about this time I started getting a string of emails from Vanderbilt faculty, the first of which came from Mark Jarman, who at that time was a mythic character in my mind--one of those poets so accomplished that you don't even really think of them as a real person but as pure creative mystery. I had just left San Francisco and was driving back to Santa Cruz and checked my email on my phone. The email from Mark was cautiously optimistic and said that "nothing is final yet in our selection process." It was early Sunday afternoon, and presumably the 2010 recruitment weekend had just ended.

What I was to find out later is that over the course of the recruitment days, two of the accepted poets had seemed less than enthused about being here. I had already planned to fly to Tennessee to visit the University of Memphis, and after another encouraging email from Rick Hilles urging me to hold out a bit longer, I decided to go to Nashville, sit in on a class, meet some people, and just see. In visiting Vanderbilt I was amazed at how much effort was made for me, a waitlister. I met up with Zack, a first-year poet, and we got coffee and lunch (which he paid for) and he answered all the questions I had written down on the plane about the program. We rode to campus together where the program had arranged for me to have my own parking space for the time I was on campus that day to tour and sit in on the workshop. Zack had made copies of the poems being workshopped that day and Kate encouraged me to weigh in during the class. Afterward I met Mark Jarman, and then Rick Hilles and I went to chat on the balcony. After a while he took me on a tour of the campus and we walked around for nearly two hours talking about the program, the writers I'd studied with, Nashville, and many other things. The content of what was said was not even the most important part. It was the manner of it, and the willingness with which so much time was given. 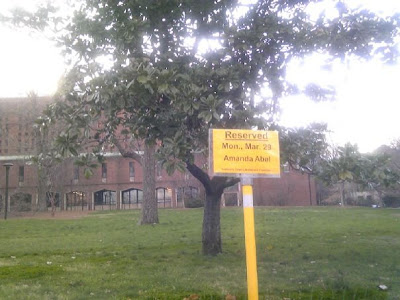 The 10 days I spent between getting that first email from Mark and getting formally accepted to the program were a weird mix of exuberance and despair. Once I had gotten a taste of a program actually rolling out the stops, it was hard to consider any others. I had gotten to the point where I was considering not going anywhere if I didn't get in off the waitlist, so that I could reapply and hopefully attend the next year. I was lucky. Mark called the day before I was supposed to leave Nashville to accept me, and I got to go out with three of the students for margaritas that night to celebrate. I knew I'd found the right people and the right program. This year, our MFA advisor Margaret (who is amazing) asked me to be the poetry representative in coordinating the Recruitment Weekend. So with my fiction friend Jill, we planned out Thursday through Saturday, sent emails to admitted students, made arrangements to pick everyone up from the airport, transport to and from the hotel and events, and arranged lunches and dinners and tours and coffee, doing our best to roll out the stops for people who would hopefully become our community. Neither Jill nor I had been at the recruitment activities last year, but we both feel very fortunate to be here now and can appreciate the insanity that accompanies the application season and decision-making process.

Last night as I was driving back home from the big English department party for faculty, students, and admitted students, it occurred to me that the whole thing was rather like dating, but not in exactly the way I saw it before. When I'd been going through this last year, we all heard tales of wooing by different schools and what an impact that made on the people who experienced it. Once I'd been wooed by Vanderbilt, I couldn't imagine anyone else. But from this side of things this year, I was very aware of how it seemed more like an awkward first date than a courtship. Even if the dinner is good and the guy came to pick you up and held doors open for you, it still has to feel right. First impressions are important, but sincerity is imperative.

I was impressed with the choices that the faculty had made. The personalities and backgrounds of the students are as different as my class this year, and the class that precedes us. But everyone seemed open and kind. Luckily for us current students, we're all glad to be here. When someone asked me about my experience, I could say honestly that there was nowhere I'd rather be, that everyone here is appreciated and the faculty go out of their way to make sure you get everything you need. The other thing though is that I genuinely liked everyone (which is good since I don't fake interest well) and went home a little giddy everyday at the prospect of these people being my peers. How cool to be on the other side, making sure that others feel welcome. I also know, though, how much of the decision depends on instinct. Even when people make you feel welcome, it might still not be right; no amount of urging or fun parties can make up for instinct. No matter what, you have to feel the spark. But by our last brunch today, the awkwardness of the first date seemed over. Real conversations were happening, summer plans were being discussed. Hopefully we'll get a second date.
Posted by amanda at 6:39 PM

Great post. I'm currently on the waitlist at Vandy for poetry as well, so it's interesting to see what the process is like from the other side, and to hear from someone who has been in the same position.

Good luck, r.g.e.! Only one poet has accepted their position thus far, so we're still waiting to hear from two. Are you in anywhere else?

I am still waiting to hear from Boston University, and I am waitlisted for an English PhD at UT Austin, but Vandy is far and away my first choice. Wish I could visit, but Tennessee is a bit far from Belfast, where I am living at the moment.

Mark Jarman emailed me to say that I am "well-placed" on the waiting list, so we'll see. I remain (very) cautiously hopeful. Thanks for the response!

Hey r.g.e., Sadly I wanted to tell you that I just found out that all three of our poetry first-rounders accepted their positions. Best of luck with UT and BU~

Thanks for letting me know, I guess I'll be getting an email from Mark Jarman soon. Pretty disappointing, but encouraging to have made it this far.

I'm glad to find some info here on the admissions process. I am on two waitlists, have no news from two others. One of the waitlist schools could be my first choice--is there any point in communicating with that school to see where things stand and express my interest, or is it better to just hang on and wait? Not sure what MFA applicant etiquette is. Meanwhile, my heart is being won by the school making an excellent offer--it's nice to be wanted.

Oops--somehow part of my message did not appear--I also have two acceptances that are awaiting my decision. Hence the dilemma.

r.g.e. You should be encouraged! The only difference between you and me is that some of the first round for my year turned it down.

LewEllyn, I know that our faculty do appreciate getting emails from the waitlisters about their continued interest. I think it's one of those things where you probably don't want to send the email more than once (or at least wait a couple weeks between), but I don't think it's a bad idea to let them know you're still around and interested, especially if it's one of your top schools.