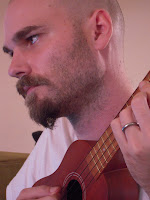 I am incredibly excited to be joining the community here at MFA Blog. I have been trolling and enjoying the posts from afar for a while, and am looking forward to finally contributing to the discussion. I have been working professionally with a non-profit theatre company for several years (Tricklock Company), but just recently started the MFA program in Dramatic Writing at The University of New Mexico in Albuquerque. I am still adjusting to being back in academia after almost 8 long years, and feel like I still have a lot to learn from this side of the desk. A more lengthy Bio is below.

Kevin R. Elder is the Co-Artistic Director of Tricklock Company and has been a Resident Artist with the company since 2003. Elder became extremely dedicated to the creation of new work in 1999 upon completion of his first original work Tiny Caravans. Since then, Elder has been a part of creating more than a dozen highly acclaimed original works which include, The Glorious and Bloodthirsty Billy The Kid, as well as Love and Beauty, Knit, Black River Falling (Alibi’s Best Performance 2007), Catgut Strung Violin (Outstanding Original Work, Ottawa Fringe, Alibi’s Best Performance 2009) and most recently he directed/co-created a collaboration with Teatr Figur Krakow of Poland, Nasze Miasto/Our City. Elder’s original work has been seen in Albuquerque, Dayton, Chicago, New York City, Minneapolis, Los Angeles, Canada, Germany, Poland, Scotland, and Serbia.

Elder has taught classes and workshops nationally and internationally. He is currently an instructor of Tricklock Company’s Ensemble Incubator class, and has in the past taught Entering the profession at The University of New Mexico for the past several years. Elder is also one of the founders of Tricklock Company’s Manoa Project: Teen playwriting and Ensemble Apprenticeship Program, where he has trained high school theatre students from all over New Mexico, for the past 8 years.

Kevin R. Elder currently resides in Albuquerque, New Mexico, where he is enrolled as an MFA student in Dramatic Writing at the University of New Mexico.

Hi, Kevin! Great to be blogging with you! I'm curious: what range of experience is there in the MFA in Playwriting? Does everyone enter with a resume of staged work as impressive as yours? Or is it more like the other genres, where the manuscript reigns supreme?

I suspect those two correlate a great deal, but I'm nonetheless interested in hearing about any exceptions to that, as playwriting is a form in which I'm becoming increasingly interested.

Hi Adam, I apologize for the tremendous delay in my response. My first semester certainly has caught me a bit off guard!

I am really only able to speak to my particular Dramatic Writing program, but they only accept three students a year. Even with only three, we are all very different in theatrical experience, styles, and approach. I was blessed to get in with a great group right out of my undergrad, and was able to mine a lot of excellent experiences because of it. However, one of my colleagues did not have much background in theatre at all. I don't believe that a lack of stage experience was a short coming for the other students, but I know that it was incredibly helpful towards getting me accepted to this particular program.

I think that most programs are very interested in the ability of their students to be successful as artists or academics after finishing. If one already has a great deal of success before applying, it would seem that one has already proven a level of dedication, work-ethic, and ability. This will be helpful.

That being said, if your work is excellent and fits within the program's mission, then you shouldn't need the previous work experience.

Again, sorry for the long wait. I hope you were not holding your breath!

Well thought content impressed me! I am glad to check out sharing information and accordingly meet with the demands. design company profile