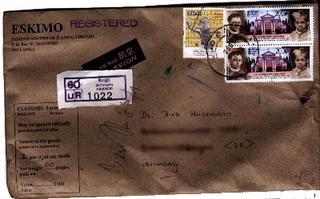 The MFA Blog Mailbag appears every Monday of the MFA season: from late August to mid-March. If you have a question or comment for the mailbag, please send it to our email address.

The "Unreliable Narrator" doesn't list his/her real name or place of residence, so we'll assume he/she is part of the witness protection program. We won't blow your cover UN, and we like the code name. Unreliable applied to Brown, Iowa, and Columbia last year, and, I think I understood this correctly, got into Columbia. The questions posed are 1. Should Unreliable reapply to Brown, where the funding is excellent, 2. Should if he/she apply to other places, and/or 3. Should he/she petition the professors at Columbia about funding.

Let's take them in reverse order. First of all, Columbia funds only a very small handful of their students. Meanwhile, the tuition for the 70 students admitted each year is $33,000 a year. Plus the expenses of living in New York City. That adds up to over 100K for two years. While Columbia has graduated many, many outstanding writers over the years, this doesn't seem to me to be a smart monetary investment. There are many schools of equal quality that offer much better funding. Overall, it's my advice to steer away from Columbia and other MFA programs that charge such high tuition.

I don't think that petitioning professors is going to be much help. Certainly, the program director will decide which of the handful of students receive funding, but the number is so small that I don't like your (or anyone's) chances.

Yes, I would recommend that you apply to many more schools. Three doesn't sound like enough to me. Eight is more like it. Spread your net wide and keep your options open. By all means, keep Brown on your list. They have an excellent reputation and the funding is outstanding. Do keep in mind that Brown is known for encouraging "experimental" writing. I don't know what that is specifically, but if you don't feel like your writing fits this broad category, then that might be a wasted application.

Some additional programs in the geographical locations of your previous three schools: Michigan, Indiana, Syracuse, NYU, Massachusetts, and Minnesota. Best of luck you you, Unreliable Narrator.

Next up is a returnee to the mailbag, Ryan, who is not a fan of the Bush Administration, and who is considering moving overseas. He's wondering about resources for finding international creative writing programs. Ryan, I do list these in the book. There are about 40 of them that I could find. Until the book is released in December, your best resource is a website from International GradSchools.com. It's at http://www.gradschools.com/listings/out/creative_write_out.html

Chris is a fan of all three of our sites, including The Daily Pick, where he saved about $100 through our link about free software, and he also likes The Winged Girl, which is a weblog of my novel in progress. Thanks for the kind words, Chris.

As an undergraduate thinking about MFA programs, Chris wonders if it's best to have a writing project (novel, story collection, poetry collection etc.) in mind before he attends a graduate program, or if it's okay to go in to simply learn and discover the project as he moves along. I guess my answer is yes to both. You definitely want to have a goal of finishing, or in most cases near-to-finishing a book by the time you graduate from a master's program. I think that most graduates finish their book in the year or two after their program, but the 2-3 years inside the program create the foundation and much of the walls and rooftops of the book. In my case, I definitely didn't use any of my pre-MFA stories in my story collection. All of them were written either during the program or in the year afterwards. I didn't have any idea of what my story collection would look like before I entered the program.

Hold on, scratch that. I did have an idea about the book, but that idea changed dramatically as I read many new books, learned from different teachers, and went through both the official and unofficial workshop processes. So, I think it's just fine to not have a project in mind. However, I think you should have a goal of finishing or near-to-finishing a book by the time the program ends, and you should have some idea about the book by the end of the first year. And by the way, I'm a big fan of three year programs. I got, by far, the bulk of my story collection written in my third year at the University of Massachusetts, once I'd gone through the rigors of workshop, listened to what people (peers and teachers) had to say, and then had some time to let those voices subside a bit. The third year was very critical for me.

One final note, Chris: I've said this before on the blog: I think it's a very good idea to have some time between graduating undergraduate and attending an MFA program. It saves you from burning out in the academic world, and it allows you some life experience from which to write. Two years is enough, though more is fine too. The average age of an MFA student is around twenty-eight years old.

Thanks for the questions. I'll have a feature up later this week, and more from the mailbag next Monday.
Posted by Tom Kealey at 9:33 AM

The writing division was very apologetic about the expenses when they called to accept me (I think the phrase "it sucks, I know" came up around three times).

The writing program is fine but big. BIG. 50 people in fiction. Whether this is good or bad is up to your own personal style I guess.

I personally don't have a problem with the writing division but I do have a massive ax to grind with The University as I think that they are fucking greedy.

A friend of mine once pointed out to me that, for instance, medical schools are rightfully expensive as they require chemicals, gurneys, and stainless steel implements. What does an MFA program require? A COPIER MACHINE. It's a great coup for a school to have one, isn't it? Little expense, great dividends. Jesus.

I went, however, because it was the only place that accepted me and so far, despite my carping about finances, I'm not regretting my decision. (I applied to Iowa as a formality and of course didn't get in but even if I did, I like to think I would've rejected Iowa because that in and of itself would've been a lot of fun) I like the work that's been coming out of Columbia in recent years and the instructors so far are very good.

Incidentally, I think Cornell has a nice financial package. I've heard they offer a tuition waiver and a 20 grand stipend for each year (don't quote me. I have friends that go to Cornell MFA but we don't talk about finances as it's sort of a depressing topic).

wow, it was almost therapeutic to air this stuff out.

One of the reasons that my "sorry about the funding" alma mater is that way is because all classes are taught by profs, and there are no teaching assistantships.

I went because I knew how much one-on-one time the program's students get with faculty -- namely, tons. For me, that made a student loan and part-time work worth it. (Full disclosure: I went to SLC for undergrad, too, and I understood their structural approach.)

Obviously, others' mileage varies -- dramatically. But I am really uneasy with the idea of dismissing programs from consideration based on price tag alone. I think a better approach is to be realistic about what you're going to get, what you're willing to pay for it, and how likely it is that the two will balance.

Here’s a list of tools you will need to start: Jewelers’ pandora jewellery wire cutters - If you can only afford one pair, get memory wire shears. pandora charms These are designed to make clean cuts on tough memory wire, so can also be used for pandora charms uk softer wires. Chain-nose pliers sometimes called cheap pandora charms needle-nose pliers – Very versatile for picking up and grasping small items, pandora charms sale bending eye pins, closing jumps rings, even closing crimp beads. discount pandora charms Round-nose pliers – Used for creating loops on beaded head and eye pins. Can also be used for winding your own jump rings and as the second pliers you’cheap pandora ll need for closing jump rings. Optional pliers – Wire-looping pliers which have several graduated circumferences to allow you to form perfectly uniform jump rings and loops in place of the pandora discount uk round-nose pliers mentioned above. Crimping pliers which have little notches to allow you to both flatten a crimp bead and then bend it to form a rounded finished look instead of the flat crimp you pandora uk get using the chain-nose pliers. As for materials, I recommend some assortment packs of beads in coordinating colors, some decorative metal spacers, seed beads in both silver and gold These can serve as spacers and beautifully set off pandora sale your other beads., tube-shaped crimp beads Buy the best you can find – these are what hold it all together!, head and eye pins. Other than that, let your choice of project be your guide. You might want some silver or pewter charms.