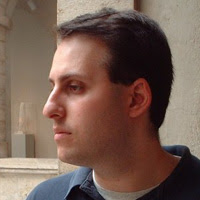 Seth Abramson is presently a sixth-year attorney with the New Hampshire Public Defender. Beginning in August of 2007, he will be attending the University of Iowa Writers' Workshop (poetry) and teaching introductory English Literature courses at the University.

A graduate of Dartmouth College and Harvard Law School, Seth's interest in the MFA application process dates to the summer of 2006, when he immersed himself in "hard data" about MFA programs in preparation for his own graduate school applications. His website now includes the first comprehensive MFA program rankings since U.S. News & World Report last ranked MFA programs in 1997. A funding-weighted ranking (delineated "The Kealey Scale" in honor of its inspiration) can be found here; a large-scale poll of MFA applicants conducted on the popular Poets & Writers website can be found here; and a composite of the funding-weighted "TKS" ranking and the Poets & Writers poll can be found here.

Seth's website also includes hard-to-find acceptance rate data, a chart of application response times for various MFA programs, an analysis of which schools' graduates are most likely to teach at the top 25 MFA programs, and a largely-for-fun assessment of which schools' graduates win the highest number of major awards, honors, and fellowships.
Posted by Seth Abramson at 3:24 PM

Now, you are a writer, but you went ahead and got what my parents would like to deem "a real job" before you decided to pursue the MFA. If you had to do the whole thing again, would you put your career in law ahead of pursuing what I assume (and I may be wrong here) your first love. Do you think it was better to get more life experience before you entered the MFA? I ask because I receive daily tongue lashings from my family, urging me to pay the rent first-then get the MFA. I feel as though at this point in my life I want to write full time but money is impossible to ignore.

Your thoughts are much appreciated!

I have a feeling, when your family talks about "paying rent," they're not envisioning you as a public defender! At our clinics they sell a t-shirt which says: "Don't tell my mother I'm a public defender, she thinks I play piano in a whorehouse."

Anyway, one thing you can certainly point out to the fam is that law school is a lot easier to get into than an MFA program, generally speaking, which means you can always return to school down the line if (say) the law interests you. With law schools, all they do is refer to a chart which indexes your GPA and LSAT (and maybe they look at your alma mater, too). With MFAs, well, you know how it is: if the schools don't feel you write well, or write passably yet, grades and all that other stuff won't matter. So, I'm not sure there's a necessary "order" (so to speak) of things: I went to law school and am now going into an MFA program, a friend of mine (a fellow poet) got his MFA seven or so years ago and is just now graduating from law school. You never know where life will take you, or when. And it's never wise to put off doing anything under the theory that (for instance), "I'll have more money then..." Unless you're able to make a very great deal of money, money has a way of getting spent--for myself, I'm going into the MFA with pretty much empty pockets.

Being an attorney preserves my options in the event I decide not to try to teach after the MFA, and/or decide not to apply to PhD. programs. But in the end I'll follow my heart, because you only live once, and because money has never been my top priority (NB: which is as hard a way to live your life as the other, by the way; sometimes I think it's just trading one misery [lack of personal fulfillment] with another [poverty]. Be warned!). I don't regret going to law school or becoming a lawyer, not only because I got (and am now doing) a job I always wanted to do--and have loved doing it, for the most part--but because any experience you have, wherever it may be, teaches you something if only you keep your eyes open for it. Nothing is a waste unless you make it a waste.

Going to HLS taught me to be skeptical of institutions and group-think, at least more than I had been. It also taught me to be a methodical thinker, to see the "big picture" (if only because the "little picture" was so privileged it's essential fraudulence was impossible to miss), and in many respects to feel more confident about myself and to feel (oddly) much warmer toward people in general. I'm sure you'd find an MFA a real eye-opener, both in terms of the seedier side of the writing thing (internal politics, cronyism, tribalist aesthetic "camps," a general lack of anything approaching a coherent set of ethics) as well as being exposed to folks from widely-divergent backgrounds (always the case in college, too, but in graduate school you get a spectrum of ages, too, which is key). Plus it's inspiring to be around inspired people, isn't it?

You can't go wrong doing an MFA because, provided you don't drown yourself in loans to do it, you haven't foreclosed any other options. Have a good GPA and the ability to score well on the LSATs? Then you can go to law school anytime. Many of my classmates at HLS were much older than me. Many were married and had children.

So: The key is to avoid crippling debt.

Earning money now is, I think, less crucial; avoiding a black hole of debt is, by contrast, of paramount importance (for the obvious reasons: starting your financial life at zero is one thing; starting it at negative one hundred thousand is quite another). Personally I can't see doing the MFA, at any age, without substantial financial aid in the form of grants or fellowships. Because it's not strictly speaking a professional degree, there isn't a straight correlation between "degree" and "employment" (and "income") as is the case with law school. Hence, it's not worth the same level of debt (for law school, $100,000+).

At HLS I spent a lot of time around people pursuing what I'd call their "second-choice dream." Everyone had something else they would rather have done but it was "too risky" financially or otherwise, and/or didn't meet with family approval. This one wanted to be a musician. This one wanted to be a non-fiction writer. This one wanted to be a major-league baseball umpire. This one could have played basketball overseas. I didn't want to be like that, I didn't want to spend my life thinking "if only I'd..." Sure, several years from now you might want something different, but in your 20s you can't be expected to have your whole life mapped out. People just don't live that way anymore, even though many in my parents' generation did.

I went to law school knowing (I know this is bizarre, but it's true) that I wanted to be a public defender upon graduation. I couldn't have gone--couldn't have stomached either the work or the atmosphere--if I'd only been going to please someone else, or only going in the hope of some abstract future financial gain. Go to graduate school, any graduate school, for the wrong reasons, and invariably you'll regret it, no matter how much money the world throws at you upon graduation. Good money doesn't undo a bad decision. So: assuming you can avoid major debt, I'd say one guiding principle is to never put yourself in a situation where you'll be absolutely convinced you'd rather have been somewhere else, but simply didn't have the courage to "locate" yourself there--conceptually or in actual point-of-fact. Law school isn't going anywhere, and neither is money. They'll keep printing it, I promise you.

The Boston University MFA in Creative Writing would like to let you know about new travel awards in fiction, poetry, and playwriting.

A generous donor has made it possible for us to send a good number of our students abroad after they complete the two semesters of our workshops.   Those chosen may go to any country and do there what they wish, for a typical stay of three months.    We are sending one fifth of our students off in the summer of 2009 to three different continents; in the summer of 2010 we hope to support similarly up to one half of our graduating class.

I adore you and your effort you've put on this article. Keep posting statement of purpose college